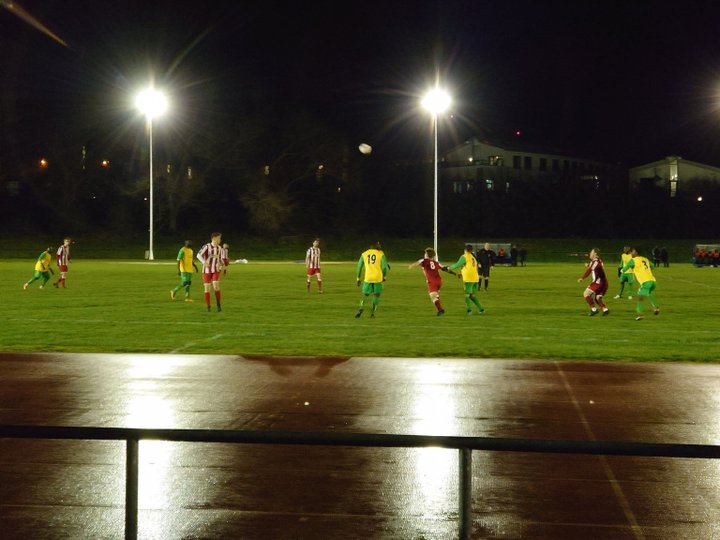 Jeff Idemudia netted twice in the second half as Lopes Tavares came from behind to defeat Frenford at the Terrance McMillan Stadium and jump back into the top four of the Eastern Senior South.

The hosts knew a win would take them back into the top four on goal difference and with games in hand on the teams above, they still had a chance of catching them too before the season was out, so three points was very important.

For Frenford it’s been a terrible 2020 so far, only one win and seven defeats in the eight games they have played since the turn of the year, and their chances of a top four finish and promotion was slipping away, so three points would probably just about keep them in the hunt still.

Frenford skipper Carl Conway should of given them the lead with the games first chance when he got in on goal but saw his effort struck straight at Wilkinson Boateng in the Lopes goal, but in the 11th minute Frenford did grab the lead as Shane Wallace struck home a free-kick and the visitors had the start they wanted.

Lopes then saw Tony Cookey get in on goal, despite it looking suspiciously offside, but the hosts attacker could only send his effort wide of the far post, before a visitors corner towards the near post was headed over the bar by Lee Forbes, and then Frenford got in down the right through Kambo Smith, bit his effort was sliced wide.

Alvaro Guerero then fired over for Lopes from outside the box, and then soon after a cross to the near post saw Joel Appiah challenge the ball with visiting keeper Sean Hinton, and the ball hit Appiah and looped wide of the near post.

Lopes then went even closer when a ball fired across goal just invaded the stretching Carlos Indjai, and then soon after Appiah fired across goal and wide of the far post, but just before the break Frenford missed a sitter as after a ball in had slipped away from keeper Boateng, Dylan Jones could only fire over the gaping goal. It meant Frenford went into the break with a slender one goal lead.

The second half began superbly for the hosts and the worst possible way for the visitors when barely a minute after the break Lopes levelled when Idemudia got across his marker to power home a header at the near post.

Frenford then had the chance to retake the lead when a ball forward saw keeper Boateng totally mis his kick and the ball fell to Smith but he could only fire across the goal and wide, and in the 69th minute Lopes turned it around when Idemudia was laid in before he fired across Hinton into the far corner to put the home side ahead.

Frenford again tried to reach and saw a corner kick into the six yard box fail to see anyone apply the finishing touch and the ball drifted away for a goal kick, before Lopes almost added a third after a ball fell to Appiah but he could only send his effort at keeper Hinton.

Idemudia then messed up a header after being found with a corner, before Frenford fired across goal down the other end, and then the visitors so nearly levelled as a loose ball fell to substitute Julian Edwards but Boateng got down to save.

Lopes then broke and almost sealed the deal when Richard Kone burst through but saw his effort saved by Hinton, but the follow up from Appiah was blasted over the bar, but the hosts did take the points to move into fourth spot and see Frenford to an eighth defeat in nine as their chances of promotion slip further away.

 ESL/EaSL South Midweek Round Up (2nd/3rd March) Woodford, Walden and West all grab victories in ESL, whilst Lopes back into top four, Wormley into tenth in South after wins, Stow, Stansted through in cups too

ESL/EaSL South Weekend Round Up (28th/29th February)  Entire ESL schedule wiped out due to weather whilst only three games in South took place which saw Side into fourth, Bakers stay third after late win & Ramblers grab late point at Wick