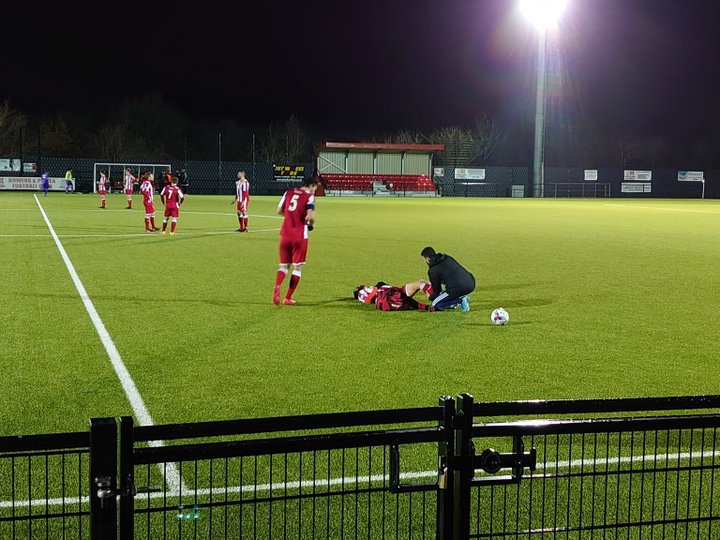 Carl Mullings early second half strike was enough to see Barkingside into the top four of the Thurlow Nunn Eastern Senior South after victory over Frenford at The Len Salmon Stadium.

Frenford were coming into this one having lost six of their seven games since the turn of the year, and run that had seen them fall to tenth in the standing and seven points off the top four, whilst Side had been up and down as they had been all season since 2020 began, but they knew a win would see them into the top four.

Harry Daly had the first attempt on goal in the game for the hosts, but this effort was fairly comfortable for visiting keeper Duncan Smith, whilst down the other end Archie Hammond sent a low free-kick along the turf, but it lacked power and hosts keeper Sean Hinton got down to make the save.

Side then tried to play out from the back and ended up giving the ball away to the home side, and eventually saw Daly curl wide of the target, before the visitors broke through the hosts back line through Muyiwa Osenie, but a poor first touch meant his effort at goal was made more difficult, but it was still a decent stop from Hinton to deny the visitors.

Ben Steward then tried a shot from distance for the hosts but it was off target, before Side broke from a Frenford corner but failed to take advantage after a poor pass, and then Frenford went straight back down the other end and saw Shane Wallace with a decent opening but he miskicked although he managed to then cross into the box but the visitors managed to deny the home side.

Julian Edwards then saw a effort deflected behind the visitors goal, and this corner ended up falling to the edge of the box where it was headed over the bar, and then Side again got into a promising position through Harry Matthews, but his effort was blocked once again by a defender.

Frenford suffered a blow late on in the half when Conor Duffy limped off, but his replacement Dylan Jones almost made an immediate impact but saw his effort blocked, and then Tom Trowbridge headed over the visitor’s bar.

Side then should have taken the lead themselves when Joe Gent found himself with a clear sight of goal, but Hinton came to make the save and deny them, meaning the game remained goalless at the break.

Dylan Jones fizzed a decent ball into the visitors box early on in the second period but although it found Daly he could not adjust his feet in time so could only really divert the ball towards goal which went straight at Smith, but four minutes after the break Side broke through when Mullings thumped a terrific effort from outside the box in off the post.

Gent then almost in for Side but saw the ball get stuck under his feet and allowed a recovery challenge to come in and thwart him, and then Hammond fired an effort at the Frenford goal which was straight at Hinton, this after a Dan Jones effort had been blocked.

Wallace then tried to float a cross shot into the visitors far corner, but it was off target and behind for a goal kick, and then Edwards saw a near post flick at goal well blocked by the visitors defence as the game entered its final quarter.

Frenford then saw Dylan Jones turn but fire an effort into the side netting, before Gent found some space outside the hosts area but saw his effort deflected over, and from that corner Side should of doubled their advantage but saw centre half Nathan Saunders head over from point blank range.

And then a terrific move from the visitors almost ended with a second, but Dan Jones could only divert the ball just wide of the post, before Gent then curled over for the visitors from range as we entered the final ten minutes of the contest.

Side then broke forward, but a square ball was weak, and Hinton managed to gather, and in stoppage time Frenford pumped a ball into the visitor’s box but the loose ball was sliced well wide.

The visitors then almost sealed it when another substitute Francesco Ballestrini saw an effort well saved by Hinton, and then Frenford so nearly pinched a point when with the last attack of the contest a loose ball was poked wide of the target from close range.

It did mean the visitors picked up the points and climb up to fourth, whilst Frenford stay tenth but have now lost seven of their eight games this year and are now nine points off the top four with just ten games to go.

ESL/EaSL South Midweek Round Up (25th/26th February)  Hadley, Hashtag and Clapton all grab wins in ESL, Benfleet bounce back with win in South, Ensign go out of Thameside Trophy