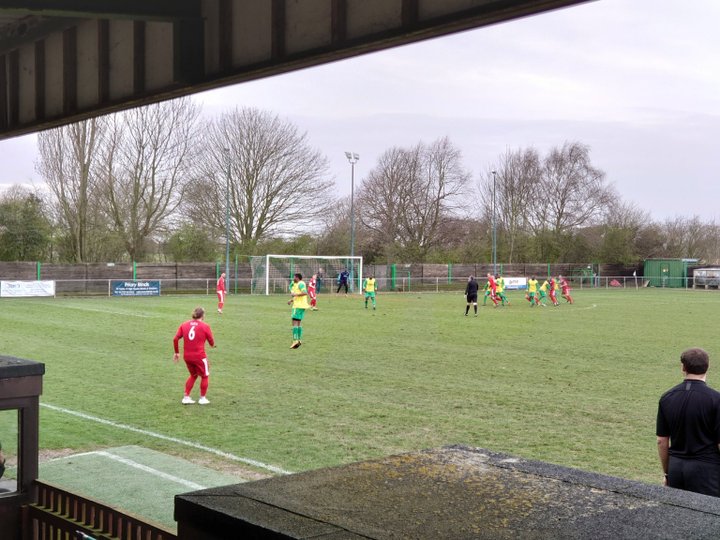 Friday
Eastern Senior South
May & Baker 2 Frenford 1 (May & Baker’s unbeaten run continued after they handed visitors Frenford their ninth defeat in ten games since the turn of the year to go level on points with second placed Little Oakley in the Friday night fare at Parkside. The hosts broke through after 17 minutes when a ball forward to Barth saw him find space between defenders before sending an effort between keeper Cook and the post, but Frenford found a leveller before the break when Dedman headed home a corner. But with seventeen minutes left hosts substitute Odili timed a run to perfection to convert a brilliant ball in by Hoxhaj, and it proved to be enough to win this one for the hosts. Frenford’s freefall continues in 2020 though and they slip to 13th)

Saturday
Essex Senior League
Hadley 7 West Essex 0 (Hadley kept the top three honest after they netted seven in a big home win over West Essex at Brickfield Lane. Manny Hammond smashed home from a corner to give the hosts the lead, and it was 2-0 at the break thanks to Yemi Buraimoh who produced a good finish. Bradley Marriott then got a slight touch on a Sam Edwards free kick for number three, before Edwards produced a lovely finish from twenty yards out for number four. Buraimoh then crossed for Hammond to head home a fifth, before it was six after a good finish from Cameron Ferguson, and the scoring was completed after Ferguson finished from an angle after a Buraimoh set play had been parried out by the keeper. A day to forget for West who remain in tenth)

Saffron Walden Town 1 Walthamstow 2 (Stow picked up a huge win at title rivals Saffron Walden Town to move just three behind them in second spot with four games in hand and edge past Hashtag United in the chase for top spot. In the thirteenth minute Dwade James flashed a ball across the box and saw Connor Scully hit a wonderful first time volley into top corner to give Stow the lead, but three minutes after the break Walden levelled after Gavin Cockman’s effort was parried by Mann but Julian Simon-Parson was on hand to tap home. Stow though responded in style and retook the lead two minutes later when after a corner was cleared, it fell to Tommy Fletcher who hammered into the roof of the net. This was enough for the visitors to grab the points and put them in charge of the title race with Hashtag United away to come in midweek!!!)

Sawbridgeworth Town 1 Redbridge 2 (Hassan Nalbant and Taylor Tombides netted as Redbridge defeated bottom side Sawbridgeworth Town at Crofters. Tombides gave the visitors a seventh minute lead but were pegged back when Jake Skeet levelled on the half hour mark, however Redbridge weren’t to be denied the points after Nalbant’s 63rd minute winner, and it means the hosts remain in eighth whilst Sawbo remain bottom, 13 points behind second bottom Enfield with only eight games remaining, meaning it’s looking like an almost impossible job for the hosts to survive now)

Stansted 0 Enfield 0 (Enfield picked up a decent point at Hargrave Park against Stansted although had it not been for a Jarvis Monk penalty save the visitors could have picked up all three. The hosts did have chances themselves too but the game did end goalless which leaves The Airportmen in fifth whilst Enfield remain second bottom but well clear of bottom side Sawbridgeworth Town, currently 13 points and with a much much better goal difference and with three games in hand too)

Tower Hamlets 1 Ilford 1 (A late Jeffrey Cobblah goal saw Ilford take a point against Tower Hamlets at Mile End. Suaibo Balde had given the hosts a 65th minute lead but they were denied all three points after Kyle Roberts squared for Cobblah to tap home in the 87th minute to rescue a point for the visitors. Hamlets stay third bottom whilst Ilford are in 13th)

Eastern Senior South
Brightlingsea Regent Reserves 3 Wormley Rovers 4 (Wormley made it eight games unbeaten under new boss James Elliott and 17 points from a possible 21 after they won a cracker at Brightlingsea Regent Reserves. Davey Edmee produced a cool finish to give the visitors the lead, and after Regent had netted through Bailey Farley, Mitchell Linger then converted a penalty for the visitors, and then Linger turned provider, crossing for Louis Offer to head home for 1-3. Two Mohamed Adukar penalties though brought it back to 3-3 but Linger netted an 88th minute winner to make sure the points went back to Hertfordshire. Regent remain third bottom whilst Rovers are now up to eighth as they continue to mount a late charge for promotion)

Fire United 1 Harwich & Parkeston 2 (Harwich saw goals from Sean Bartlett and Hayden Dutch hand them victory against bottom side Fire United. The hosts goal came from Daniel Correia but the game ended nine against ten after the hosts saw Sergio Seco Sidibe sent off after only 21 minutes and Mamadou Marena red carded with just under fifteen minutes to play. Jake Plane was also sent off for the visitors, but they pick up the points and they are in tenth)

Hackney Wick 0 Benfleet 2 (Fleet are into 11th after they netted a win against fourth bottom Hackney Wick at Coles Park. Sam Dulieu poked past the keeper after just eight minutes to give the visitors the lead, before they sealed the deal in the 71st minute when Jamie Williams squared for Charlie Sullivan to tap home)

Holland 4 Newbury Forest 1 (Holland are up to fifth after they thrashed second bottom Newbury Forest at Dulwich Road. A dinked finish made it 1-0 to the hosts, before a thumping header made it two for the home side. A neat close-range finish made it 3-0 and although the visitors did find a goal themselves, a thumping penalty made sure the hosts had four in this contest and a three goal winning margin)

White Ensign 1 Lopes Tavares 2 (Ensign’s long winning run came to an end at Burroughs Park as goals from Tony Cookey and Richard Kone saw Lopes to a big win in their top four clash. Cookey headed home brilliantly after 42 minutes and then doubled that lead as Kone burst through to slot home with twelve minutes to go. Luke Skinner did pull one back from the spot with four minutes to go but was then sent off for a stamp on Jeff Idemudia, who was also sent off for his part in the melee afterwards, receiving a second yellow, whilst Carlos Indjai was also dismissed for a second yellow in his involvement in the melee. Lopes did pick up the points though to enhance their chances of promotion, whilst Ensign still have a seven-point lead at the top despite this defeat)

ESL/EaSL South Midweek Round Up (2nd/3rd March)  Woodford, Walden and West all grab victories in ESL, whilst Lopes back into top four, Wormley into tenth in South after wins, Stow, Stansted through in cups too