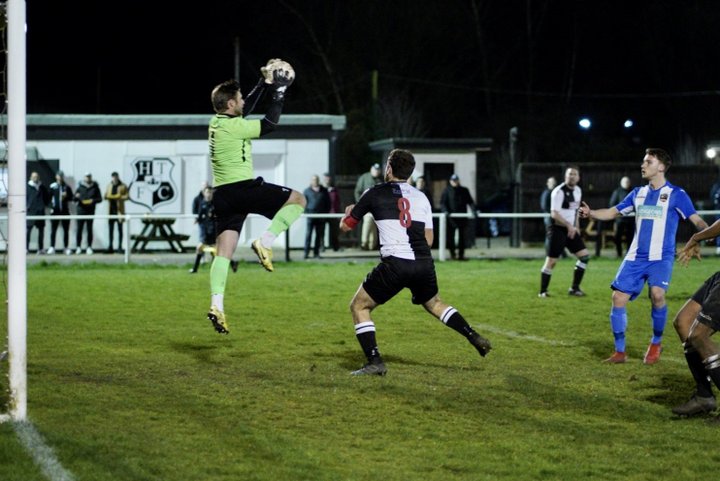 (thanks to Roger Cuthbert (@rogercuthbert) for the photo)

Monday
Eastern Senior South
The sole Eastern Senior South contest between Barkingside and Holland scheduled for Monday evening was postponed due to an unplayable pitch at Cricklefield. This will now take place on Monday 23rd March with a 7:45pm kick off.

Tuesday
Essex Senior League
Clapton 0 Hoddesdon Town 3 (played at Lowfield) (Hoddesdon Town netted three as they saw off Clapton in a game that had been switched to Lowfield following the unavailability of Southchurch Park. Hoddesdon grabbed the lead six minutes before the breakthrough Connor Bolton before doubling that lead almost immediately after the restart after Harry Bushell, who had come on at the break, produced a superb finish. And the Lilywhites sealed the win in the 68th minute when Cyrus Babaie received the ball inside the box before rifling an effort across the keeper and into the bottom corner, meaning Hoddesdon remain in seventh and Clapton 12th)

Hashtag United 2 Walthamstow 1 (Hashtag United are now in the driving seat for the title after they defeated one of their closest challengers in Walthamstow at a very muddy Chadfields. The hosts drew first blood when the visitors defence was split open through the middle and saw George Smith smash past Mann after 13 minutes, but the visitors found themselves level when after winning a penalty just past the half hour mark after Dwade James was brought down, the striker picked himself up to convert the spot kick. Right on half time though, Hashtag retook the lead as Smith found Albert Keith who found the net via a big deflection, and it meant the hosts went into the break a goal ahead. Things got heated as the teams walked off the pitch at the break and it resulted in a straight red for visitor’s defender Jason Beck, meaning Stow would have to play the whole second half a man light. The second half was just as tight though on the heavy muddy pitch, and it saw Stow hit the inside of the post twice, whilst Hashtag also had chances to seal it, but the hosts managed to hold on to take a huge three points and leapfrog their opponents into second after handing them their first away defeat of the season. It means Hashtag climb two points above Stow into second and just a point behind leaders Saffron Walden Town with three games in hand)

St Margaretsbury 3 Hadley 3 (Visitors Hadley netted a late late penalty to deny hosts St Margaretsbury all three points in a six-goal thriller at The Recreation Ground. Hadley took the lead when after good work from Solomon Ofori on the wing saw him cross into the box, and Yemi Buraimoh smashed home from close range, but the hosts levelled thanks to a good header from Belshaw. The hosts then won a penalty after a foul inside the box and saw Thomas tuck it away to give them the lead, but Hadley managed to level just before the break when Manny Hammond converted from close range. St Margs then managed to retake the lead through a Stevens strike and that looked to be enough to grab all three points for the home side, but Hadley were awarded a stoppage time penalty which Ofori converted to rescue a point for the visiting side. The hosts stay in 14th place whilst Hadley do remain fourth although they are now six points behind the top three)

Woodford Town 4 Cockfosters 1 (Woodford netted four as they defeated Cockfosters at The Harlow Arena. It was Woodford who grabbed the lead on the half hour mark when Wale Odedoyin netted, and they doubled their money via a free kick after the break from Eddy Mombanza. The visitors then got themselves back into the contest when Harley Haag bent an effort into the top corner with fifteen minutes remaining, but it wasn’t long before Woodford restored their two-goal cushion, seeing Jordan Sanderson conver a penalty with ten minutes left. And the hosts managed to add a fourth late on when substitute Rashaad Ogun converted at the far post, meaning Woodford leapfrog their opponents into ninth on goal difference)

Eastern Senior South
The one scheduled league game, Newbury Forest vs White Ensign, was again postponed due to an unplayable pitch at Oakside. This has now been rescheduled for Wednesday 15th April with a 7:45pm kick off.

Peter Butcher Memorial Trophy Second Round
The tie between Takeley and West Essex was postponed due to an unplayable surface at Station Road and will be rescheduled in due course.

Tolleshunt D’Arcy Memorial Trophy Quarter Final
Halstead Town 0 Saffron Walden Town 1 (ESL leaders Saffron Walden Town are into the semi-finals of the Tolleshunt D’Arcy Memorial Trophy after one goa was enough to see them edge past Eastern Senior South promotion hopefuls Halstead Town at Rosemary Lane. The only goal came with just over fifteen minutes remaining when Ugo Udoji netted, and it was enough to send The Bloods into the last four)

Wednesday
Essex Senior League
Enfield 4 Ilford 0 (Enfield climbed three places to 16th after a thumping win over Ilford at Woodside Park. Luke Hornsley netted in the first half to see the hosts ahead at the break, and Chris Gormley added the hosts second just past the hour mark, and then Gormley added another with eighteen minutes remaining. And they capped a fine performance by adding a fourth through Steven Ellery after 77 minutes to seal the win, whilst Ilford drop to 13th)

Sporting Bengal United 0 Stansted 2 (The Airportmen remain fifth after they saw off Sporting Bengal United at Mile End. The hosts thought they had taken the lead after the ball appeared to be over the line, but it was not given, and just before the break Stansted were down to ten men after Ryan Ramsey was sin binned. With twenty minutes left though Stansted did edge ahead after Billy Coyne scored straight from a corner, and then ex-Sporting midfielder Ashaan Siddik doubled the visitors lead on his return to Mile End to seal the win for the visitors. Sporting remain 15th)

Thursday
Peter Butcher Memorial Trophy Second Round
Redbridge 1 Sawbridgeworth Town 3 (at Crofters) (Sawbridgeworth Town are into the Quarter Finals of the Peter Butcher Memorial Trophy after they defeated Redbridge at Crofters. The tie was due to take place at Oakside but with the pitch there still unplayable the tie was switched to Crofters, and it was Sawbo who took the lead after eleven minutes when Cabham Clarke produced a good finish, and it was two four minutes into the second period as Tashan Randall netted. Taylor Tombides then pulled one back for The Motormen just before the hour mark, but Skeet restored the visitors two goal cushion with twelve minutes remaining and seal their passage into the Last Eight where they will travel to Spa Road to take on Witham Town Reserves)